As promised, here is a more detailed look at my son's first birthday. The theme was Dr. Seuss's "Oh, The Places You'll Go!" and it was so much fun to work around. It was held at our local Lion's Club meeting space.

Right as guests entered, I had a table set up. The first thing was a copy of "Oh, The Places You'll Go!" for the guests to sign. Next were copies of the cards I had made for Colston's time capsule project (post on that coming later) of his first year. Finally there were favors for all the kiddos. 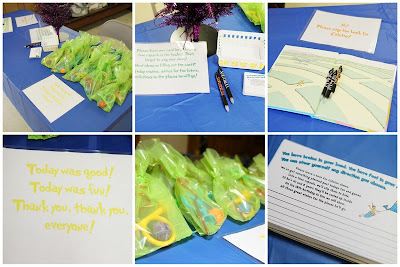 The cards (as well as the invitations) were made by a super talented high school friend, Jenna. She has an Etsy shop called Oh Creative One. Stop by and see her; I guarantee if you don't see it, she can make it! James and I wrote the little poem for the cards, which reads:
"Please leave a note for Colston James
We've got something planned past today's fun and games
Into a time capsule we'll slip them to hide
Til he's 10 and 8 years they'll be locked up inside
On his 18th birthday to him we will show
All these great wishes for the places he'll go" 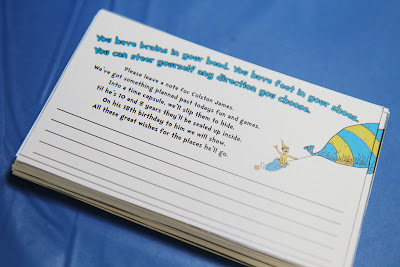 The responses on the cards were amazing. I didn't have the opportunity to read them until the day after the party, and man oh man...I cried! A few were funny but most of them were inspirational and sweet. The ones from his great-grandmothers were especially tear-jerkers. Don't even let me go any further, tears are welling just thinking of it!

I knew we would have a wide age range of kiddos, and tried to come up with inexpensive activities that didn't require continual adult supervision. Our Lion's Club is situated behind a residential street, in a huge field. It was awesome because there was no danger of any traffic, and the kids could roam around safely.

I had kid-sized footballs (from Dollar Tree) and one of those huge flying discs (from the $2.50 bin at Target). My father-in-law made the cornhole boards (more on that here), there was a water gun area, and then inside was a coloring station.
Before the party started my dad filled a huge plastic tub with water, and we filled up all the water guns too. That made things much easier on all the adults!
For the coloring station, I picked up 3 cheap coloring books at WalMart. I tore off the covers and pulled apart the pages. The crayons came from Dollar Tree, and so did the 3 little metal tubs I split them into. 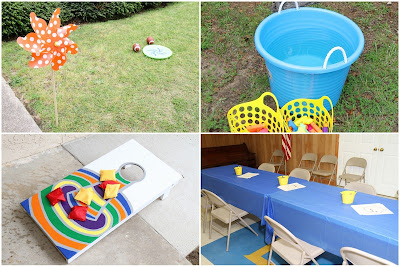 Most of the info on the decorations can be found in my first post, but here's a few shots of other things that weren't as labor intensive.
I picked up balloons the day of from our local 5 & Dime.
I hung huge paper poufs from the ceiling, which we purchased at a big box party store.
I also hung pictures of Colston, progressing through his first year, one each month. The guests seem to enjoy that, and it was cool to see how much he changed.
I simply printed 5x7's from WalMart and then ran them through my laminating machine. 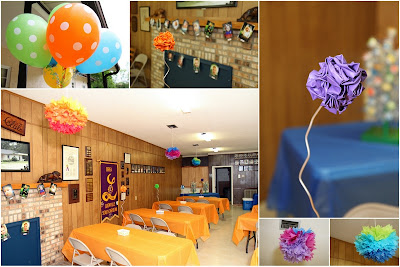 For food, I wanted the prep to be simple. I didn't want to be worrying with cooking or warming things the day of.
I had chips & dip; pasta salad, fresh fruit, cheese cubes, and my BFF graciously picked up some chicken nugget trays from Chik-fil-A the day of (thanks, Jenn!).
We have this fabulous, decades-old place here called Tanner's Big Orange. They have food but they're known for their 'party punch'.
It. Is. Divine.
I got several gallons of that, in purple (to make the ice cubes) and green (to drink!).
I'm thirsty just thinking about it. 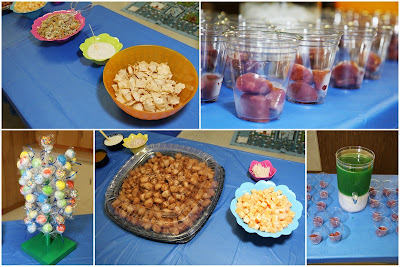 We couldn't have asked for better weather. Colston's birthday is the end of April, and weather here is famously iffy that time of year. On this particular day, it was sunny, breezy, and mid-70's. This same time 5 years ago, when I was married, it was pouring rain and the high was 50. So I was worried, but it turned out beautifully.

The mondo pinwheels came from Hobby Lobby. They were a last-minute find, but I adored them. So did Colston and all the other kids. 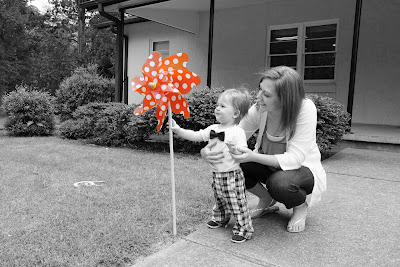 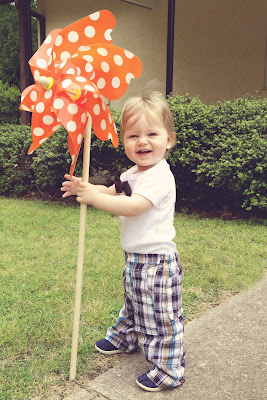 A gorgeous butterfly hung around for a while. 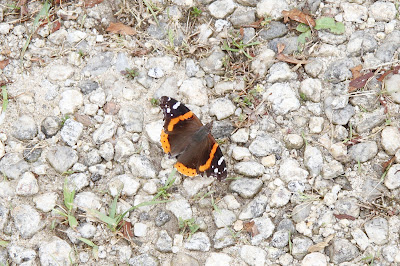 So, remember that water gun area I mentioned?
BAHAHAHA...
To say it was a hit would be a HUGE understatement.
Please observe... 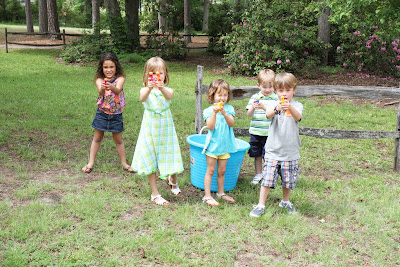 The kids went wild! They chased down any adults who dared come near...including our photographer!
(luckily, she's a mom too, and was a good sport about it!)
At one point, James came inside and his back was soaked; he said it was an ambush!
Ha! 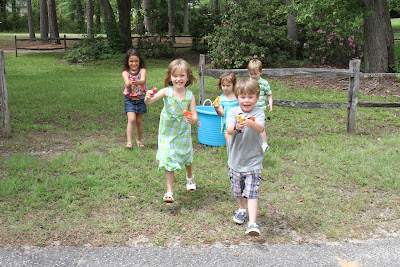 This picture cracks me up every time.
Those two girls are my BFFs. I have known them since we were barely walking and talking.
I mentioned on Facebook that this always makes me laugh; my "oh crap!" expression, Casie's smirk-y "uh-huh, see what you got yourself into by having kids" and Jenn's smug "uh-huh, and THAT is why I don't have any". 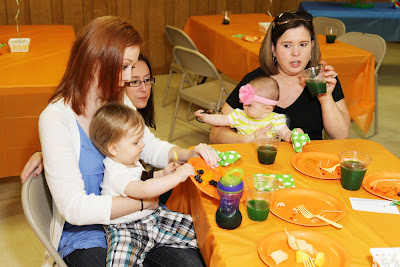 I was so darn excited about cake. I just *knew* Colston was going to LOVE it. I had all these images in my head of him smashing and squishing and icing flying. I even put a table cloth under his high chair in preparation for the mess.
The cake was just a small round cake from our local Publix. I told the nice bakery lady our theme and she did a great job.
But back to Colston and the cake. I knew it was going to be a hit. Every kid goes wild with their first cake, right? 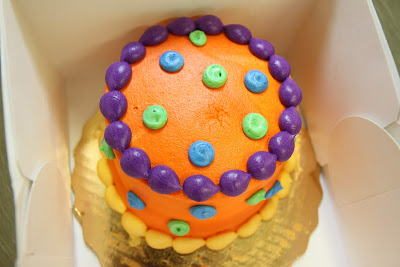 WRONG.
He. Was. Pissed.
Now, in fairness it wasn't because of the cake. Everyone sang, and he looked a little concerned but at the end...they all clapped and cheered...and well, he lost it.
A lot. 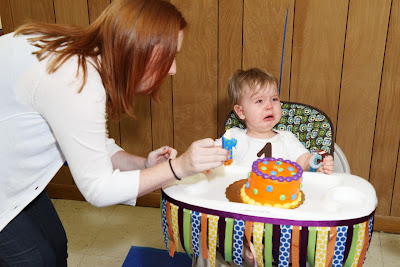 Poor baby, he never did eat it. I do have a ton of pictures of him red-faced, teary and snotty though...oh well, what can you do, right?
It was a success in my book. Plus it will make for some funny memories as he gets older. 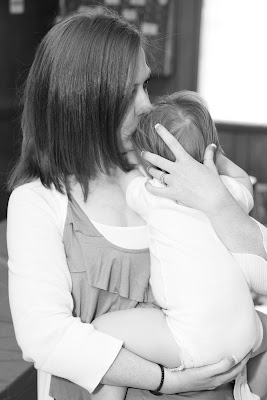 I really couldn't have asked for a better day. I had friends and family that came early (and from as far as TN; thanks Justin!), stayed late, helped us with decorating, setting up, cleaning up, you name it.
But best of all, they helped us celebrate our little man's first year!
(oh, and us surviving it...there's always that!) 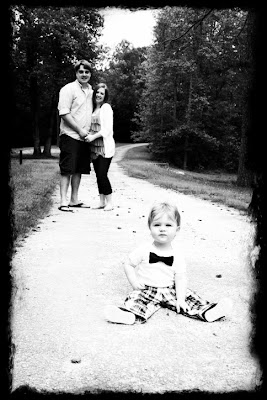 All photos are courtesy of Yuli Smith.For these party ideas & more, visit my Pinterest board here.Heck, why not follow me while you're there? :)

Posted by LP aka A Crafty Southern Chick at 7:00 PM

Comments make me do a little dance, y'all!

LP aka A Crafty Southern Chick
I am a Southern girl who loves her hubby, son, and has a major shopping & craft addiction! :)